Results from the International Year of Pulses, Two Years Out

The International Year of Pulses (IYP) was declared by the United Nations for 2016 and ended in February 2017. What were the year’s legacy outcomes?  The IYP saw the pulse sector band together to conduct an unprecedented worldwide campaign. Today, multiple sources and research results agree:  this very special crop might make an immense difference in a world where the estimated number of undernourished people increased to 815 million in 2016, up from 777 million in 2015.

The IYP campaign saw amazing results all around the world, including in the digital realm. In 2016, the consumption of pulses experienced a 10% increase worldwide.  In India, which has always been a great champion in the pulse industry, it was record breaking, with 23% year over year increase in pulse production (2016-17 v 2015 -16)!

The food innovation sector was also highly influenced by the campaign: there was a 10% increase in global product launches containing pulses and pulse ingredients. Based on a report by Mintel, 4,121 new pulse products were released globally in 2016. The competition #LovePulses product showcase saw more than 60 new pulse based products developed within the IYP campaign.

The social media numbers are even more mind blowing. To give a sense of the success of the International Year of Pulses campaign, there have been over 1.1 billion social media impressions (including all campaign hashtags e.g. #PulseFeast, #IYP2016).

The world celebrated together on Global Pulse Day on January 18th, 2017, as people around the globe gathered to honour these astonishing crops. Global Pulse Day exceeded all expectations: while the year before Pulse Feast saw 141 events in 36 countries, on January 18th 2017, the celebrations broke the record of 225 events in 63 countries, reaching 62 million impressions via social media.

We witnessed a great variety of events: some planned pulse-based company events or parties with friends and families, others launched videos or recipes promoting pulses, some hosted seminars on pulses, and many simply joined the social media campaign that day.

The outcome of these celebrations was so positive that the FAO hosted a closing ceremony of the International Year of Pulses in Burkina Faso on February 10, 2017. In addition, thanks to the leadership of Burkina Faso, the Conference of the UN Food and Agriculture Organization (FAO), which is the governing body of the agency, endorsed the proposal to celebrate an annual World Pulse Day during its 40th plenary session in July 2017. Galvanized by the important achievements of the 2016 International Year of Pulses, and wishing to build on its successes, the Conference acknowledged the enormous value of pulse production and consumption for food security, human health, and the environment, and requested that the UN General Assembly, at its next session, consider declaring World Pulses Day an annual observance each year on February 10. The campaign for World Pulse Day is still underway, as it now awaits discussion by the UN General Assembly in the coming year. If approved, that will be the final hurdle to have an ongoing global celebration of pulses.

To keep the momentum alive, Burkina Faso is hosting a Pulse Day event on February 18th, 2018, featuring the participation of the Director General of the Food and Agriculture Organisation, Jose Graziano da Silva, and an award to the President and First Lady of Burkina Faso for their global achievements in the pulse sector, to be presented by the Global Pulse Confederation President Huseyin Arslan.

World Pulse Day will continue to be a means to celebrate the benefits of pulses, as well as a way to continue the dialogue on issues where the crop still needs help, such as yields, research and nutritional studies.

The lack of investment is one of the reasons for the large gap between the potential of pulse crops for meeting global sustainability challenges and current capacity to capture this potential. According to the ‘Global Pulse Productivity & Sustainability Survey,’ the 13 pulse crops receive just USD 175 million in research funding annually, a tiny fraction of the USD 61 billion directed toward public and private food and agriculture research. With more research attention, pulses can make major contributions to sustainable food and agricultural systems worldwide. 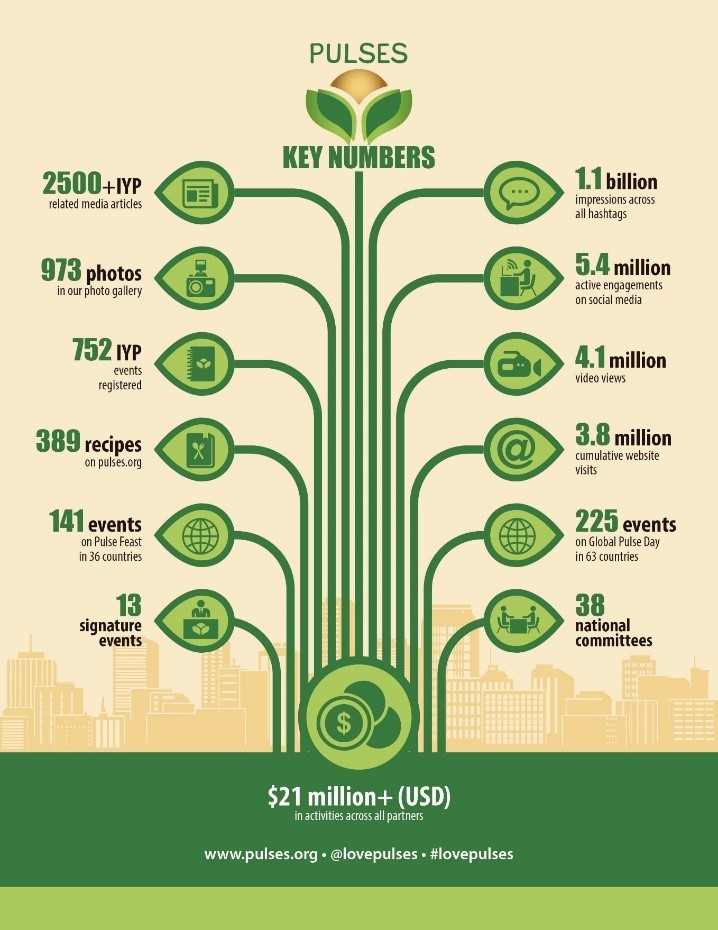 study in Malawi conducted by Drs. Mark Manary (Washington University in St. Louis School of Medicine) and Ken Maleta (University of Malawi School of Medicine) involving the complementary feeding of pulse (cowpea and bean) flours to young children. The most noteworthy findings from this study were that:

These important findings further add the impact of pulses on child growth and gut health. Those complement some of the other nutritional and health benefits known to pulses:

Another outcome of the International Year of Pulses was the publication by the International Food Policy Research Institute (IFPRI) of a new book about pulses, exploring the nutritional and environmental benefits of pulses in India to help policy makers find ways to feed and nourish a growing population. Pulses for Nutrition in India: Changing Patterns from Farm to Fork makes very valid points in trying to understand how pulses can play a major role in India’s food policies and gives answers to many questions, including: What is the role that pulse production plays in global trade? What are the changing demand for pulses in India since the 1960s? How can we improve pulse yields with better technology to compete with cereals? What are the long-term health benefits of greater reliance on pulses?

The pulse sector is living exciting times. Having been for too long a neglected crop, pulses are now more important than ever, considering our world food security challenges. The increase in research shows a growing interest from the agricultural science community and brings back fundamental findings on the many benefits of pulses for people and the planet.

Robynne Anderson is the President of Emerging ag inc and provided the secretariat services to the Global Pulse Confederation for the International Year of Pulses.