Prairie Oat Growers Association President, and a good friend, Art Enns, sowed a 35-acre crop this spring with the generous intention of donating the revenues of the harvest to the Manyinga Project. With a wet and rainy start to the harvest season, Art was in store for an adventurous day in the field.

MANITOBA – When Manitoba oat grower and Prairie Oat Growers Association President, Art Enns, sowed a 35-acre crop this spring with the intention of donating the revenues of the harvest to the Manyinga Project, he had no idea what an adventure that harvest would be.

“It’s been a challenge. In our area, we’ve been really inundated with some heavy rain and the field that I had was no exception,” says Enns. “I had some difficulties trying to get the crop in shape to harvest and then when harvesting came we also had a breakdown, but you know what – that’s all part of life.”

Swathing had to be done between rainstorms and in the mud, but the skies had cleared up by the time Enns started to combine on September 3 and the weather cooperated just long enough for him to get most of the oats in the bin.

His good luck didn’t last long. An axle on the combine broke in a mud hole, and the rain started again before he could assemble the friends and equipment needed to repair it.

Five days later, with the help of those friends and a track hoe, he was finally able to get the combine off the field and onto higher ground. But the work wasn’t over yet.

Enns figured he still had about four hours of harvesting to finish the field, but when he thought of the obstacles faced by the kids at the two schools in Zambia, Africa that the Manyinga Project supports, he was more than willing to go back out.

“We’ve got challenges over here, but they pale in comparison to the challenges these kids face just getting their start in life,” says Enns. “We are teaching children 10,000 miles away about agriculture and I say that we can improve their lives. I think it’s really worth it.”

This is the second year Enns has planted a field in support of the Manyinga Project, which funds two schools for orphaned and vulnerable children at Chinema and Samafunda, small villages in the Manyinga region of Zambia.

The two schools have a combined enrolment of over 400 students annually, where they are taught the state curriculum in grades one through seven.

Each school also raises field crops, garden vegetables, orchard fruits and goats to teach critical life skills in an area where subsistence farming is the primary way of life, and to help support a student nutrition program.

“Art has been a great supporter of the project, and these fields of oats he has planted and harvest over the past two seasons have made a real difference in our fundraising to support these two schools in Africa,” says Robynne Anderson, one of the founders of the group that started the Manyinga Project.

Enns estimates the crop’s total revenue should be between $9,000 and $10,000, with all of the expenses of raising the crop covered by himself and a few donors. Last year the field yielded about 125 bushels per acre, but he expects the yield to be closer to 90 bushels per acre this year.

Enns jokes that Anderson owes him a couple of stiff drinks after what he went through getting the oats off the field, but is looking forward to doing it all over again next year.

“It’s all about the children, and I’ve always had a real, deep desire to help young people,” says Enns. “For me, to be a part of something that is teaching the next generation about farming is pretty special.” 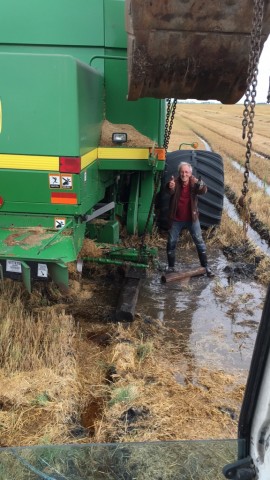 Caption: Art Enns gives the thumbs up to the track hoe driver. 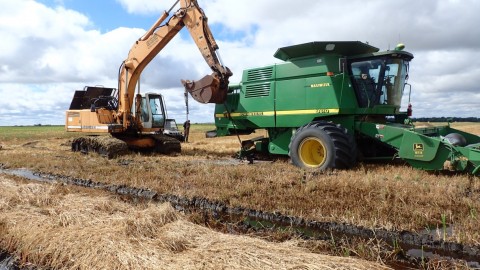 Caption: A track hoe lifts the rear axle of the combine out of the mud to be repaired. 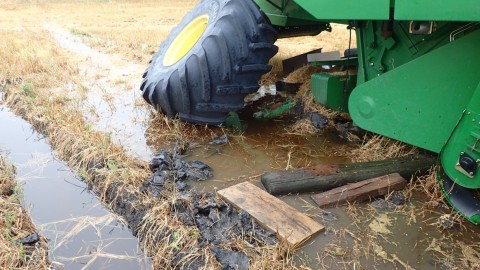 Caption: A broken rear axle leave the combine stranded in the mud. 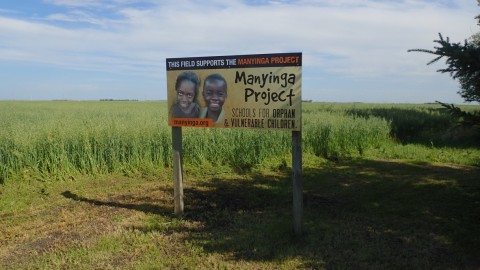 Caption: The field of oats earlier in the season.