Robynne Anderson, President of Emerging Ag, highlighted the Post-2015 Development Agenda at the International Fertilizer Industry Association’s (IFA) “Strategic Forum” in Marrakesh. Agriculture and nutrition have been recognised as extremely important elements of the Post-2015 process, and IFA wanted to underline this through their conference. The Post-2015 Development Agenda enthusiastically seeks a more global and inclusive approach, establishing firmer dialogues. The participation of civil society and the private sector are encouraged, ensuring a much more inclusive stakeholder model.

Anderson participated in the event, giving an extensive presentation on IFA’s international engagement with the United Nations, related UN agencies and figures, as well as member states. Through IFA’s New York tours, members have built up a strong relationship with country missions there. With the objective of finding common goals and shared processes, IFA has already been able to start making great contributions to the Post-2015 development process.

IFA held its first ever 2014 “IFA Strategic Forum” in the city of Marrakesh, Morocco, from 19 to 21 November. The aim was to raise the level of engagement with IFA’s members, particularly on the strategic opportunities related to the industry as a whole. Other prime objectives were a special session on Sub-Saharan Africa, an examination of the fertiliser industry’s relationship with other key players in the agricultural value chain, and establishing a unified IFA work program for 2015. 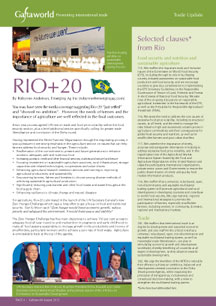 From an article written by Robynne Anderson for Gaftaworld, Issue 197, August 2012
You may have seen the media coverage suggesting Rio+20 “just settled” and “showed no ambition”. However, the needs of farmers and the importance of agriculture are well reflected in the final outcomes.