Emerging had a busy, productive, and diverse 2017. Here is a short selection of some of our proudest accomplishments of the past year.

Burkina Faso hosted the official closing ceremony of the International Year of Pulses and Emerging was present on site. The President of Burkina Faso and the First Lady were actively involved in the Year and have been advocating for the United Nations to declare February 10 as World Pulse Day.

Also in February, Emerging’s President, Robynne Anderson, presented at the International Spice Conference on February 12-14, Kovalam, Kerala, India. Read more about the 2017 ISC, the theme of which was “Disrupt or be Disrupted,” here.

Emerging did extensive work with The International Livestock Research Institute (ILRI) to outline ways for ILRI and other actors in sustainable livestock development to build stronger engagement with the United Nations System. Among other activities, Emerging’s strategy helped to position ILRI in the UN as a leader in research on livestock and animal agriculture matters, engaged in strategic UN processes and events with UN agencies and Member States and contributing expert knowledge on issues impacting the livestock sector of developing countries. Learn more about ILRI here.

Emerging welcomed Sid Mehta, Executive Vice President. He works extensively on the Committee on World Food Security (CFS) as well as on Emerging’s Food Service and Retail projects. An Indian and Canadian national, Sid speaks English, Gujarati, Hindi, and Marathi, and is based in Calgary, Canada.

Prairie Outs Growers Association Ottawa Tour: Emerging was proud to work with the Prairie Oat Growers Association (POGA) of Canada to promote Western Canadian oats during a tour of Ottawa, Canada. During this tour, 24 meetings were held with prominent members of the ag network, from the Minister of Agriculture and Agri-Food to high-level officials at the Canadian Transport Agency. Learn more about this effort here.

IAFN Coalition for an Enhanced Codex: Emerging is the Secretariat of this new coalition that advocates for food safety standards and an improved Codex Alimentarius process to facilitate the trade of agricultural crops. The Coalition met at the Codex Committee on Pesticide Residue (CCPR) in April in China. Through the year, the Coalition expanded to 29 members and 8 observers; 9 coalition calls were held; bilateral meetings with 21 countries occurred; and four case studies were commissioned to illustrate the effects of non-compliance with Maximum Residue Limits (MRLs) on small- and medium-sized farmers. Read our position paper here.

Annual General Meetings of the International Agri-Food Network and the Private Sector Mechanism: In May, Emerging coordinated a highly successful series of meetings for members of IAFN and PSM in Rome, Italy. In three days, representatives from 70 member states met with business and farmer representatives to exchange views on the work of the UN Committee on World Food Security (CFS). Key areas of focus included nutrition, the Sustainable Development Goals (SDGs), Urbanization and Rural Transformation, CFS’ Multi-Year Program of Work (MYPoW), and Women’s Empowerment. Learn more at www.agrifood.net.

Emerging executed a training for Global Dairy Platform (GDP) Ambassadors, with the goal of creating a team of high-level representatives of the dairy sector (Dairy Ambassadors) who can engage regularly at the international level. Emerging helped GDP ensure that these representatives receive training on UN procedures and protocols, build relationships and consistency with UN representatives, and thus become spokespersons for dairy who are familiar with UN systems and activities. 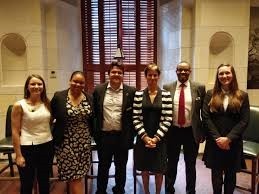 Agriculture and Food Day: In the context of the High-Level Political Forum for Sustainable Development (HLPF), the International Agri-Food Network (IAFN) partnered with 12 organizations to host the Ag and Food Day on July 13. The day, which highlighted the central role of agriculture and nutrition in achieving all SDGs, was attended by 181 guests, including the President of the UN General Assembly, the President of the Economic and Social Council, 9 ambassadors, and 55 speakers. Ag and Food Day also included a Youth in Ag Luncheon, which celebrated the potential of young agricultural leaders to achieve the SDGs. Read the full report here.

Robynne Anderson spoke on the topic of Global Engagement at the Ceylon Tea Conference, August 8-11, in Sri Lanka. Prominent topics in her remarks included discussion of the role of the Codex Alimentarius and the challenge of complying with Maximum Residue Levels (MRLs) for the tea industry. Learn more about the Ceylon Tea Convention.

Emerging welcomed to the team Nick Palombo, a Policy Coordinator who works on multistakeholder engagement at the UN as well as Business and Industry representation at the United Nations Environment Assembly (UNEA). He is currently based in Toronto.

The FAO Regional Meeting on Agricultural Biotechnologies for Asia took place in Kuala Lumpur, Indonesia on September 9-13. Emerging supported 16 individuals in registering for, attending, and actively participating in this important conference. Read more about it here.

Emerging welcomed two new team members: April Dodd and Fabio Niespolo. April is an American Leland Scholar from the Congressional Hunger Center in the United States. April’s focus will be on engaging farmers and small and medium enterprises at CFS and other FAO meetings and establishing regional private sector groups. Fabio is a Policy Manager who works on coalition building and policy development. An Italian national based in Spain, Fabio speaks Spanish, Italian, French, and English.

The 44th United Nations Committee on World Food Security (CFS), the foremost intergovernmental platform with the goal to ensure good nutrition and food security for all, was held in Rome, Italy from October 9-13. Emerging serves as the Secretariat for the Private Sector Mechanism (PSM). This year, we coordinated a delegation of 134 registered participants from 37 countries. PSM members hosted four side-events, spoke in plenary, appeared on panels, met with the Director General of FAO, and actively networked with ambassadors, government officials, the civil society, and more. Emerging also coordinated the extremely successful High Level Dinner, which attracted a diverse group of 190 attendees who spent the evening discussing multistakeholder approaches to food loss and waste. Read the HLD report here.

Emerging formally welcomed Brian Baldwin, with whom we have collaborated for years, to the team. Brian has extensive experience working with FAO, USAID, IFAD, WFP, the EU, and the private sector in diverse roles all over the world. He now serves as a Development and Policy Advisory.

Prairie Oats Growers Association Mexican Mission: Emerging coordinated a mission to Mexico to promote culturally-appropriate integration of oats into the Mexican diet. Oats, which have a low glycemic index, are a good option for those at risk of diabetes. The mission was a continuation of a social media campaign “Avena Canada” that has garnered over 180,000 Facebook followers. The mission took place during the World Diabetes Day included a very successful cooking class that showed chefs and dieticians delicious ways to incorporate oats into healthy recipes appropriate for diabetic patients. Read more about the experience here.

On November 22-24, the FAO Regional Meeting on Agricultural Biotechnologies for Africa took place in Addis Ababa, Ethiopia. Emerging supported the attendance of a delegation of nine farmers, SME representatives, researchers, and lecturers. Read their reflections here.

Emerging welcomed a team member, Mumbi Munene, who is based in Nairobi. Mumbi’s work focuses on stakeholder engagement, with particular focus on building relationships with partners in Sub-Saharan Africa and with the United Nations Environment Programme (UNEP).

On November 30, Emerging’s President, Robynne Anderson, was inducted into the Canadian Agricultural Hall of Fame. Robynne is the youngest person to be inducted. Prior to this year, just 5 of the 215 members of the Hall of Fame were women; this year saw the induction of three extraordinary women. Read her remarks at the induction in Calgary, Alberta, Canada.

United Nations Environment Assembly (UNEA) & Global Business Alliance for the Environment (GBA4E): December 3-6 saw the first-ever Business Symposium in the context of UNEA-3. The symposium featured 12 case studies from a wide array of sectors, countries and organizations and allowed business to contribute to the #beatpollution dialogue. Emerging, as the Secretariat of this new Alliance, coordinated a large delegation of business and industry representatives throughout UNEA-3. Learn more about GBA4E here.

At the Canadian Food and Drink Summit, held on December 5-6 in Calgary, Canada, Emerging moderated a panel on the subject of Global Challenges and Dimensions of Food Loss and Waste. The panel presented four innovative approaches to reducing food waste, which is estimated to cost Canada alone over $31 billion annually.

Want to learn more about our projects?

Or, meet all of our team!