The Cross-Canada Ag Adventure: Driving from Calgary to Winnipeg with a member of POGA 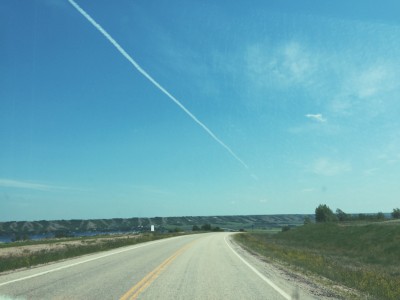 A month ago, I was fortunate to drive from the Canadian Special Crops Association (CSCA) conference in Calgary all the way back to Winnipeg with oat farmer and member of the Prairie Oats Growers Association (POGA), Bob Anderson. This was an exciting venture for me as I haven’t driven across Canada in many years, and I was able to do it with a proficient farmer and agricultural leader ready to answer all of my mundane questions about fields, weeds, and farm history. Newly in the agricultural industry, I’m keen to learn about the many different aspects which go into farming. This was my chance to learn the gritty details.

Bob Anderson, Robynne’s father, is a long-time oat grower from Dugald, Manitoba, and the President of the Manitoba Oats Growers Association (MOGA). He was recently interviewed by the Western Producer regarding the formative years of POGA, which were “un-rich at the beginning”, but the organization has now grown to be prairie wide and is known for their effectiveness in discussing industry issues.  Their national presence has been a great asset resulting in a credible voice to lobby government, build relationships within the industry, and attain research money.

POGA is important because it provides a valuable voice to farmers throughout the country and it engages with all sectors of the industry.  Compromise is an important aspect of this organization, as each member does their part for the betterment of the whole industry. Farmers and industry both have to be in agreement with each other in order for it work. It’s a family working through the kinks as they are presented, which is why it’s important to listen to the voices of each member big or small.

With that, picture me – a young woman fresh in the industry – driving along the TransCanada highway with an experienced farmer, asking questions as simple as, “What is this crop?” and “What do you mean milkweed isn’t a dairy product?” It was my small questioning voice being answered by Bob’s big knowledgeable voice.

By the time we reached Regina, I felt like I had studied through 4 years of an Ag degree at the University of Manitoba.  The trip was incredible, a two day drive with a layover in Swift Current. I learnt about leafy spurge, how to identify crops, the process of seeding to harvesting, as well as fun trivia about the damaging effects of salinity in farmers’ fields. We had driven along the highway, and taken detours through the Qu’Appelle Valley. Bob taught me about the agricultural history of the Valley, and I explained the story behind naming a place the French term “Who calls”.

The diversity in agricultural land between provinces is incredible. It was still early in the season, so I was able to witness crops in the beginning of their growth cycle. This not only made it more difficult to differentiate them for me, but it also made it a fun and factual highway trivia game. Now, sitting in my Winnipeg home office, I can’t help but encourage others to take advantage of driving across Canada, and I can’t wait for the day I end up at a conference out East with Bob and he needs company on his drive back to Manitoba.  My first question for that drive is “why did the potato cross the road?”

With a passion for creativity, marketing and communications, Stefanie contributes to Emerging’s online communications and brand management, develops graphic visuals, and provides communications support to Emerging and its valued clients. Stefanie has grown up in a family with a long history in agriculture. Her family roots and exposure to farming and agri-business has nurtured a natural love for the industry and the wonderful people who work in it. Prior to joining Emerging, she has gained career experience working with Parks Canada in a Promotions and New Media role and developed skills including videography, advertising, marketing, social media and graphic design. Stefanie is a Canadian national and speaks both French and English. She graduated from Ryerson University in Toronto, Ontario, with a Bachelors Degree of Design. Stefanie attended the Copenhagen School of Design and Technology where she specialized in Sustainable Communications which included sustainable design, communications and marketing. Stefanie has spent time living in both Denmark and Rome, and is currently based in Winnipeg, Manitoba, Canada.