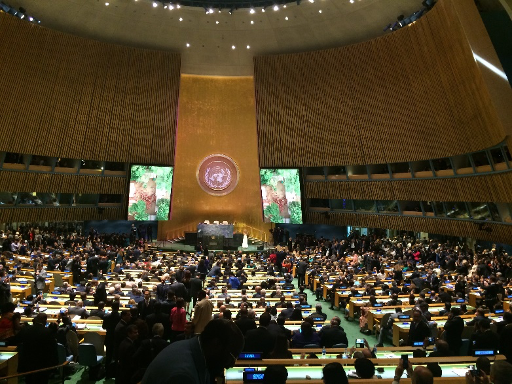 What makes up a General Assembly High-Level Week (HLW)? Is it just the delegates and representatives sitting in the General Assembly hall and the Statements by the Heads of State? For those of us who have experienced and dare I say, survived a General Assembly HLW, there is a lot that comes with it. It includes months of long preparation, the many logistical arrangements, Secretariat staff, snipers on the Secretariat building, sniffer dogs, long security lines at various UN entrances,  NYPD officers in their numbers, the not-so-secret secret service protecting the dignitaries, traffic jams and street closures and of course the Heads of State, High-Level dignitaries and representatives from Capital. Oh, and did I mention the numerous, countless hours of work and very little sleep? Yes, these and much more, are all the things that make up a General Assembly High-Level Week.

The High-Level Week for the 75th session of the United Nations General Assembly was historic, therefore, not just for commemorating 75 years of the founding of the United Nations, but also because it was the “Quiet General Assembly”, with neither the people nor the hustle and bustle. For the first time in the history of the United Nations, because of the COVID-19 pandemic, world leaders were unable to travel for this annual meeting. Instead, prerecorded messages were played in the General Assembly hall with one representative from each delegation occupying delegations’ seats. Additional High-Level meetings and events in the margins of the week took on the nature of webinars and virtual meetings. Diplomacy via Zoom and video messages! What was previously unimagined, became reality.

This was a defining moment for the General Assembly and to coincide with the 75th anniversary of the founding of the United Nations was all the more timely. The ability of the United Nations in general and the General Assembly in particular, to adapt to an unprecedented environment highlighted the critical role which the UN has played for 75 years in bringing the world together. COVID-19 has shown us many of today’s’ challenges are global in nature and can bring the world to a standstill. To address them multilateralism is a necessity, and the UN is central to these efforts.

This sentiment was very much at the heart of the messages sent by world leaders. The annual high-level debate of the General Assembly conducted virtually for the first saw the largest ever number of Heads of State and Government. The discussions were very much framed by the impacts of  COVID-19, which has laid bare the inequalities and fragilities in global systems. For the first time in three decades, human development progress is expected to reverse and extreme poverty and hunger will rise, the gains made towards achieving the SDGs are being lost, the impacts of climate change and biodiversity loss are being felt everywhere. World leaders acknowledged that these challenges and more are global in nature and must therefore be addressed holistically by the international community. Strengthened multilateralism for boosting partnerships are key to addressing and overcoming these challenges. Statements issued recognized the need for the UN to be more reflective of its membership, to be accountable, and be at the center of efforts to build a post-COVID-19 world that is more equal, resilient and sustainable. The implementation of the SDGs was recognized as being critical to these efforts.

In addition to the High-Level General Debate, there were several key high-level events. The first was the maiden SDG Moment held on September 18 for the purpose of identifying changes needed to recover quicker from COVID-19 and deliver the SDGs over the course of the decade of action on SDGs. The Moment highlighted successes and identified where more action was needed.  Issues addressed included rising poverty and hunger, loss of biodiversity and rising greenhouse gases, financing for the decade of action, inequality, and the need for global solidarity in recovering from COVID-19 and achieving the SDGs.

The High-Level meeting to commemorate the 75th anniversary of the UN was held on September 21 under the theme “The future we want, the United Nations we need: reaffirming our collective commitment to multilateralism.” In his remarks, the UN Secretary-General noted that the “world has a surplus of multilateral challenges but a deficit of multilateral solutions”. A “Declaration on the Commemoration of the Seventy-fifth Anniversary of the United Nations” was adopted at the meeting.

The Summit on Biodiversity held September 30 highlighted the urgency of action to reverse biodiversity loss. Speakers were united in the view that the rate of biodiversity loss and ecosystem degradation is happening at an unprecedented rate. If this continued, food security, water supplies, and livelihoods will be threatened, as will the ability to fight diseases and face extreme events. Climate change and biodiversity loss were noted as two monumental challenges that threatened the world. It was agreed that the world’s current production and consumption methods were not sustainable and there needed to be a transformative change to reverse the loss and lead to sustainable and resilient systems. There were many calls for an ambitious post-2020 Biodiversity framework and for biodiversity and nature-based solutions to address many of the impacts of climate change. It was noted that 70 countries had signed the Leaders Pledge for Nature. 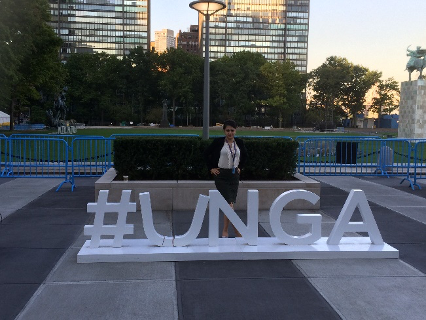 As we celebrate three-quarters of a century of this world body, we take a moment to thank the United Nations, its many staff past and present, the delegates and representatives of Member States for their work and tireless commitment towards a world where we all have a voice, where we work together for the betterment of not just our individual countries but for a better world for all, one that is equitable, safe and provides an opportunity for each of us. The United Nations continues to stand as the beacon of hope in this quest.