My Favorite Pulse Dish: Fabae Vitellianae (beans in the style of Vitellius)

When looking to get creative with pulses, instead of trying something new, why not try something very old? This recipe is taken from an ancient Roman cookbook (commonly known as Apicius or de re coquinaria, “on culinary things”) generally dated to the fourth or fifth century, shortly before the fall of the Western Roman Empire. It is named after the first century emperor Vitellius, who ruled for an extremely brief period during the Year of the Four Emperors (he was the third). Vitellius was famous for his extravagant banquets and vast appetite. According to contemporary histories, when he attempted to flee Rome to avoid Vespasian, the soon-to-be fourth emperor of the year, he abandoned all his possessions and most of his staff, insisting on being accompanied only by his cook and his pastry chef.

The dish itself is a semi-sweet bean paste made with egg yolks, ginger, honey, white wine, and fish sauce (ubiquitous in ancient roman cooking). I favour Borlotti beans, but chickpeas work well for this recipe too. It is perfect as an appetizer, served with flat bread and/or olives. Like its namesake, this dish is rich, thick, and guaranteed to disappear quickly!

Process the beans in a food processor. Add egg yolks, honey, ginger, and pepper and mix well. Put wine, fish sauce, and vinegar into a saucepan and heat. Add bean paste to the saucepan, and stir gently allowing the mixture to thicken to the desired consistency. Can be served hot or cold. 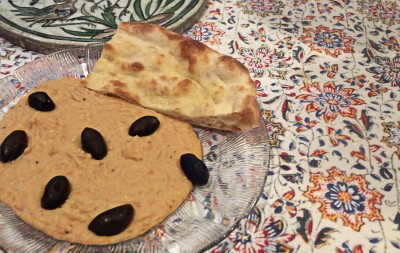 Ben works for Emerging to facilitate private sector engagement with the UN by organizing private sector representation, monitoring UN activities relevant to agribusinesses, as well as performing stakeholder communications and outreach. Ben has worked with the Office of Evaluation of the Food and Agriculture Organization of the UN (FAO) and has contributed to the University of Toronto’s Journal of Middle East Studies. He has an abiding interest in international relations and development. Ben is a Canadian national who is fluent in both French and English, and dabbles in a variety of other European tongues, both living and dead. He has studied European Politics and Human Geography at both the University of Toronto and the Institut d’Etudes Politiques de Paris. Ben has lived in places as diverse as Brussels, New Delhi and Tehran. He is currently based in Rome, but soon relocating to London, UK.