From Kenya to Canada

Canada; Alberta in particular is a cold region compared to the East African landscapes where I live. I arrived in Calgary on an afternoon and perhaps I anticipated the cold would be a little bit friendly at that time of the day. To my amusement, the sun was out shining but it was a negative degree cold on the gauge.

I was attending work training and orientation for my new role as Project Coordinator, but I was also aware of the environment around me. It was my first trip to Canada and out of Africa for that matter.

Calgary is a beautiful city with a mixed culture, tall buildings at the city centre and an organized transport system. My favourite food experience was Peter’s Drive-In with a 49-year philosophy of persistence in delivering my favourite delicacy, milk and milk products. They have the best milkshakes I have had so far with 100s of varieties of flavours. I was confused and my colleague, had to help me choose. I read people buy from Peter’s more for the history than the drink itself.

One afternoon, we took a break from work and visited the Calgary Zoo. It was fascinating to view some of the Canadian and Asian wildlife that I would normally watch on National Geographic films. The best part about the zoo is the variety and diversity of the animals. You will find all kinds of animals from all over the world with tailored habitats within their enclosures. An interesting part of the zoo is learning that all pandas belong to China and they are leased out all over the world.

On the first weekend of my stay, we drove through a wide landscape of farmlands covered with heaps of harvested hay, oil pumpjacks and dotted with black angus cattle. I wondered how the cows were adapted to grazing on snow covered grass without sneezing from the cold. Our destination was Banff, a touristic town on the foot of the white and blue Rocky Mountains. Banff is an active town compared to Calgary. There are different varieties of gift shops, several museums, condominiums, high-end restaurants and a pretty good night life.

We spent the weekend driving though Banff National Park, a conservation unit that brings together an ancient town, elks and deer, wild sheep, the Rocky Mountains, pine forests and frozen lakes and rivers. The highlight of the drive was reaching the frozen Lake Louise and best of all, was walking on top of the layer of ice that forms the lake underneath. It was a spooky experience but I must say but a good one. I added the experience to my bucket list and marked it off for that matter.

On the same weekend, we visiteded the Banff Springs Hotel, a magnificent piece of architecture that was built in the late 1800s with an ancient Canadian railway history. 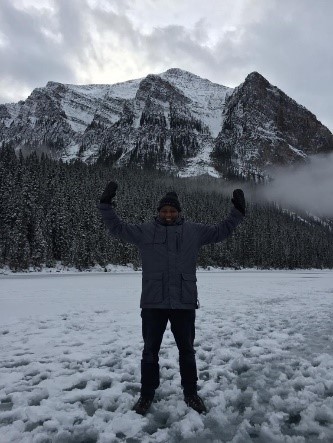 I spent my last week of work training in Olds, a quiet town with an old soul of farming antiquity and presence. The town hosts an agricultural college established in 1913. During my stay in Olds, I was honoured to attend the Royal Canadian Legion #105 Remembrance Day Ceremony, a communal event that showcased a rich Canadian culture of patriotism and honour of the fallen soldiers who fought during the World Wars. The bagpipes sound that played at the event could take you back to the 50s during the world wars.

A day before my departure back to Kenya, I had the opportunity to visit Drumheller, a town with a rich history of paleontology and fossil data. From the moment you enter the town, Jurassic park comes into your mind. The town is themed with different statues of all kinds of dinosaurs, even businesses around are named in relation to different terms of paleontology and fossil findings. We visited the Royal Tyrrell Museum and guess what? I now believe that dinosaurs existed and are not just fiction from a mad scientist.

One thing I treasured most on my visit to Canada was the meals. Meals are served in large potions which really worked well for me being a foodie. But most of all are the people. Every person I interacted with was just too nice, something that you don’t just experience anywhere. I am certain that this will not be my last visit.

At Emerging, Jacob works as a Project Coordinator. Prior to joining the team, Jacob explored ecosystem financial values that natural ecologies and biodiversity hold and provided administrative and financial support for The Wildlife Foundation (TWF) in Kenya. In this capacity, Jacob worked on projects that resolve human wildlife conflicts and initiated sustainable land use planning in collaboration with pastoral communities living within and around wildlife dispersal areas in Kenya.  He supported the growth of several sustainable social enterprise models thus ensuring peaceful coexistence between humans and wildlife, hence safeguarding a balanced ecosystem. Jacob is credited with the successful inception of The Wildlife Foundation Centre field conservation education camp program, an initiative that brings local and international students for summer camps in Kenya.