Forget about the weather, there are more original ways to make small talk: IYP 2016 in Latin America 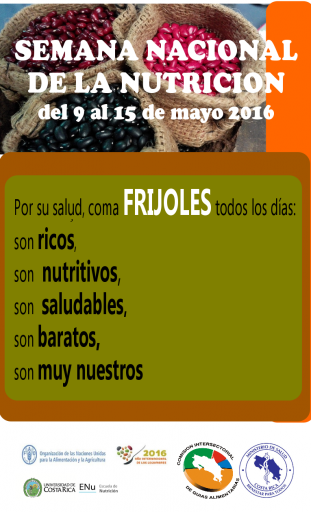 Since the United Nations started to declare International Years in 1960, only 3 foods have received such recognition: rice, potatoes and quinoa. 2015 was dedicated to soils, 2014 to the importance of Family Farming… This year pulses entered this honorary list of UN International Years, ready to show the world how much they contribute to the global food security, to people’s diets and to the soils.

As a Mexican, pulses and especially beans, are close to my heart since childhood. I was a difficult child who did not want to eat veggies. Can you guess what I preferred to eat instead? Beans. Frijoles de la olla with scrambled eggs. My niece’s favorite food is also beans… No wonder why we are called Frijoleros.

To track down what is happening in Latin America, this month I attended a couple of events dedicated to the International Year of Pulses 2016. Organised by INTA (Instituto Nacional de Innovación y Transferencia en Tecnología Agropecuaria), the LXI PCCMCA annual meeting took place in San Jose on April 5-8. The meeting gathered 300 attendants from many countries from the region including Panama, Nicaragua, Honduras, Guatemala, El Salvador, Cuba, Puerto Rico, Dominican Republic and Mexico, to discuss regional strategies for food security, mitigation and adaptation to climate change.

The conference celebrated IYP2016 with a special event that had speakers from important organizations such as Daniel Debouck from CIAT, Timothy Porch from USDA, and Rosemary Castro, from FAO in Costa Rica. Pulses are one of the most important sources of protein in Latin America and the Caribbean, especially beans. Whether it is Moros con cristianos, gallo pinto, frijoles charros or frijoles parados, beans have always been a staple food in the region, providing not only nutrition but economic stability to farmers. One thing I learned from the event is that sadly, the consumption of beans in Costa Rica is decreasing, from almost 60 gr per day in 1996, to 28 gr per day in 2007. That is about 2-3 tablespoons per day.

After the event, the Ministry of Health in Costa Rica announced that the annual initiative called “Week of Health” will be dedicated to the International Year of Pulses (IYP2016) this year. Many activities will take place from May 9-15 in the country to raise awareness on the benefits of beans, lentils, chickpeas and dry peas. We need other events like this in Latin America. We need more support from Governments. Farmers need it, as well as the population who is suffering from either overweight, obesity or malnutrition.

A couple of weeks later, I had the pleasure to talk about IYP 2016 in beautiful Antigua, Guatemala at a seminar of food innovation organized by the U.S. Dry Bean Council (USDBC). Attended by 75 representatives from the bakery and the food industry from Latin America, the seminar focused on how to use pulses in the formulation of new products. Experts explained how breads, chips, pasta, breakfast cereals, jams and many other products with beans as main ingredients are now available in the market.  As the experts explained the product innovations, I focused on how to promote IYP 2016. There are many tools and channels, but perhaps the easiest way to start is to talk about it… “Have you heard that this is the International Year of Pulses?” Forget about the weather, there are more original ways to make small talk!

Paulina helps Emerging with commercial market outreach, in particular with delegation coordination for trade missions. She is the lead event planner, coordinating the planning and onsite logistics of all sizes of events around the world. Paulina is also involved in Emerging’s online and offline communications, in particular content and community management, branding and marketing activities. Paulina has worked for many national and international media networks covering different events - not only in front of the microphone, but also as advertising sales consultant, media relations, marketing manager and host for official and public events. Her experience in Rome includes working in digital communications for the private sector and as press officer for the United Nations agency International Fund for Agricultural Development (IFAD).

A Mexican national, she is fluent in Spanish, English, Italian and Portuguese. She holds a Bachelor’s Degree in Marketing from the Universidad Mexicana and a Laurea Magistrale in Journalism from the Università di Roma Tre. Paulina has been living in Europe for the past 7 years and is currently based in Rome, Italy.